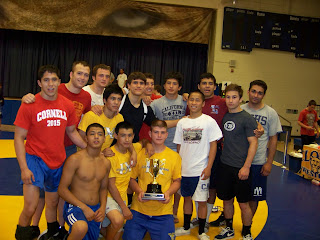 All are welcome. Don't miss out!

Posted by Adam Tirapelle at 3:00 PM No comments:

National High School Coach of the Year Steve Tirapelle of Clovis High pointed to a rare wrestling tournament that the Cougars didn't win for setting the stage for the honor.
The Cougars' fourth-place finish at the Cheesehead Invitational in Kaukauna, Wis., helped garner attention for a program that would win 10 tournaments, – including the CIF State Championship with the second-most points scored in the event's 39-year history.
That led to a No. 7 final national ranking for Clovis by theopenmat.com and prompted the website to name Tirapelle its Coach of the Year.
"The West Coast in general gets overlooked," Tirapelle said. "We're out here, and we usually don't compete against the East Coast and the Midwest. It kind of leaves you out there in limbo, where you are not seen other than wrestling yourselves."
"So making the trip to Wisconsin really helped. They saw that wrestling out in California is pretty good. We're right up there with some of the best wrestling in the nation."

The website noted that Tirapelle's coaching prowess helped elevate the Cougars past defending champion Bakersfield – a team that returned almost its entire lineup – at four common tournaments last season, including the state championships.
In addition to its 10 tournament titles, Clovis had an undefeated record in dual meets and produced a record 14 state qualifiers, seven of whom earned medals, including champions Daniel Gaytan (119 pounds) and Nick Nevills (285).
"We've been pretty fortunate this year," Tirapelle said. "To be recognized with the elite programs out there is very rewarding for the coaching staff, the kids, the school and the school district."
Posted by WKNevills at 2:45 PM No comments: