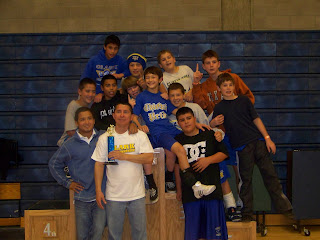 We will also do our first team runs of the year after practice on both Monday & Friday. Bring your running shoes and sweatshirt (if needed) to practice on running days!

In addition, the Clovis East JV Tournament will run all-day Friday at Clovis East High School. We will be sending available 9th and 10th graders to compete in this first official competition of the year.

Posted by Adam Tirapelle at 8:22 PM No comments:

The first weekend of wrestling has arrived for the 2008-2009 year, albeit still in the pre-season phase.

On Friday, Clovis will host an Elementary Takedown Tournament with schools throughout Clovis Unified participating. Clovis High School wrestlers will work the tournament and provide support the future of our sport.

On Saturday, Clovis will host our inaugural High School/Junior High Takedown Tournament. All Clovis wrestlers are required to be at the boy’s locker room at Clovis High School promptly at 7:00am for the start of weigh-ins. We will both work the tournament, compete, and clean-up. Plan on all day Saturday. Wrestlers will ONLY be allowed to leave the tournament at the conclusion of tournament clean-up.

On Sunday, all team members are welcome to travel up to UC Davis to watch the Aggies take on the visiting Northwestern Wildcats. The match is scheduled for 6:00pm in the ARC Pavillion. Team members wishing to travel up for the match will meet at Coach Tirapelle’s house on Sunday at 2:00pm. We will travel up, watch the match, and return that night. This is an opportunity to see some of the best wrestlers in the United States as Northwestern boasts returning NCAA Champion Jake Herbert (184lbs) as well as highly ranked wrestlers #4 Brandon Precin (125lbs), and #10 Keith Sulzar (141lbs). Also wrestling for Northwestern in his true freshman year is former 3x California State Champion #16 Jason Welch (157lbs) of Las Lomas HS. This level of wrestling is not available very often on the West Coast, so take advantage of the opportunity!
Posted by Adam Tirapelle at 8:16 PM No comments:

We are also gathering up the "old" sweatshirts & tshirts that Steve may have stashed in his garage and will be selling those Friday & Saturday at discounted pricing. Great for workouts!

Clovis wrestlers and parents have first priority on the "Got 8" clothing, we will start selling to the Jr High kids/parents in a couple weeks so get your gear early!! Please make check payable to Cougar Wrestling

Thank you,
Posted by Cindy McAlester at 8:15 AM 1 comment:

Wanted to thank all that attended the 1st Annual Meet & Greet last Saturday! Nice to see so many parents! Looking forward to a very rewarding year on and off the mat! We have a great group of parents and your support is vital to the success of this program! Special thanks to Skip & Rhonda Dieter for putting the food together!

If you have not been contacted yet about volunteering Friday & Saturday.. please contact Kerri Nevills @ 260-5092 ASAP!!!
Posted by Cindy McAlester at 10:14 AM No comments:

This upcoming weekend is the first action of the year for Clovis Wrestling. More info to follow on these 3 days of events...

In a rare opportunity, the Clovis Wrestling program will extend it’s reach outside of the state not one, but two times this year in entirely different ways.

First, long-time head coach Steve Tirapelle and son Adam Tirapelle travel to the land of Lincoln to be featured clinicians at the annual University of Illinois Coach’s Clinic in conjunction with the team’s wrestle-offs. This two-day clinic will feature coaches from throughout the state of Illinois, who will travel to Champaign to hear how the Tirapelles have built the Clovis Wrestling program and what keeps this public school program on top, year after year. The honor is unique in that it is one of the only times a high school coaching duo has presented at the clinic, a spot usually reserved for college wrestlers, college coaches, and private club coaches. Additionally, this will be Adam Tirapelle’s second time as at least one of the featured clinicians, performing the clinic as an NCAA Champion after graduating from the University of Illinois in 2001.

Secondly, in late December, the team will travel to the confines of the best wrestling state in the union for the 42nd Annual POWERade Christmas Classic in Cannonsburg, Pennsylvania. The tournament is rated the 4th best high school competition in the United States with some of the top teams from around the country participating. This will be only the 3rd time a Clovis High School team has wrestled in a nationally ranked Top 5 event. The others came when Clovis attended the POWERade Christmas Classic in 2002 and the Beast of the East Tournament in 2003. This year, the field is headlined by Central Dauphin (PA), the 2007 & 2008 large school division (AAA) Pennsylvania State Champions and early favorite in 2009, Shady Side Academy (PA), the 2008 small school division (AA) Pennsylvania State Champions and returners of 13 of 14 starters from last year’s championship team, and your Clovis High School (CA), the 2008 overall California State Champions and one of the preseason favorites to repeat in 2009. Central Dauphin is ranked #4 in the United States. Shady Side Academy is ranked #19 and Clovis rounds out the Top 40 at #23. The tournament is audio broadcast live on the Internet for the entire two-days, called by Pennsylvania wrestling experts and available to all. Details on the broadcast will be posted in December.
Posted by Adam Tirapelle at 4:33 AM 1 comment:

The time has been changed for the Meet & Greet to 5:00pm to 7:00pm from 3:00pm to 5:00pm due to a Jr. High School wrestling conflict!! Revised flyer's are going out tomorrow!! If you have any questions or have not received your flyer, please give me a call