O! we of the highest order,
Yea, we men of the great 08,
We have seen the second coming,
And belive you me it's great.
Our savior's grand, Our savior's just,
Our savior's plain to see:
Our savior, great Tirapelle
Son of the Old Man T.

Oh circle around and fight those hands
Position, remember, is key
Whatever you're doing, remember to do it
For him and the Old Man T.

Many days and nights we've fasted
In hopes that worthy we might B:
Worthy to bask in his glory,
Worthy disciples were we.
And our savior he helped us
Guided us, every last one.
Nobody ever his equal.
the man, Tirapelle's son.

Oh base back up, get off your belly!
Why won't you listen to me?
Whatever you're doing, remember to do it
For him and the Old Man T.

It was four years time we followed
Four years we were part of the pack.
Four years we pressed ever onward,
For four years we never looked back.
Our lord and savior he led us
Into the midst of the fight
And in the end we won it all,
For Adam always is right.

Oh hold hold hold, what're you doing?
Stand up, keep your arm free.
Whatever you're doing remember to do it
For him and the Old Man T.

We have come a long way with him
And some still have further to go
But however far we travel
There's one thing that we'll always know.
That he is the best, the greatest,
And those who say nay are liars.
He's the man who lives like a god
Adam, Frodo of Noobshire.

Oh you're all a bunch of freaking noobs
What the hell is that B?
Don't worry, whatever we're doing
It's for you, and for Old Man T. 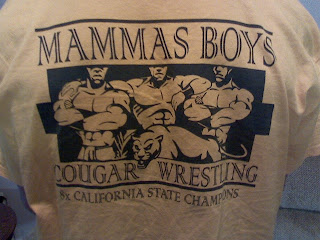 Get your Mammas Boys Shirts $12.00
Talk to Mr. Thompson
Posted by Tom Burriel at 7:57 AM No comments:

As you know Clovis Wrestling is sponsoring 3 families from Big Brothers/Big Sisters for Thanksgiving. We had a great response at the "Last Supper"... but we are in need of much more! I will be in the wrestling room Wed after practice to collect food. Also still looking for shoes for our shoe drive!

We will also take in collections for both at the Takedown Tournament!!! Lets come together and help those in need.. we are so spoiled in this program... just nice to give back!

We are winding down with the business card ad for poster... If you have any,, need turned in not later than November 25th!

As always.. Thank you and can't wait for the season to start to get our "Family" back together!!

The pre-season Amateur Wrestling News national high school team rankings have been released. For the 3rd straight season, the Cougars find themselves amongst the nations elite at #20.

Thank you to everyone that attended and brought food to the 2nd Annual Clovis Wrestling "Last Supper" ... Great to see our team come together as we prepare for this upcoming season!!

We are going to continue to collect for Big Brother/Big Sister Thanksgiving Food Drive as well as Wrestling Shoe Drive... I will be in the room on Wed evening's after practice to collect shoes & food!!

Thanks again and looking forward to a great year!!