FOLLOW UP!!! Have not heard from anyone.... need your help to make this work!!! Please call or email ASAP!! Thank you!!

With our first Summer Dual just around the corner we would like to start taking donations and asking for some help.... We are going to do a BBQ this year!! Hamburger/Hot Dogs... Chips ...Beans... Salad.. Desserts..... would like to have enough so everyone can eat!! Parents included!

Need a few dads to help with the BBQ~~

Could use some donations ... the less we have to buy the more money we can take in.. it's the out one pocket and into the other!

Drinks (Soda, Water ,Powerade.... fyi.... does not have to be Coke Products)
Lettuce, Tomatoe, Cheese, Onion, Salads, Watermelon...desserts... Please let me know what you can bring...If it's drinks... just bring to wrestling room by Wed the 16th so I know what we have.

Please email me at Cougarparentwrestling@yahoo.com

Looking forward to hearing from you 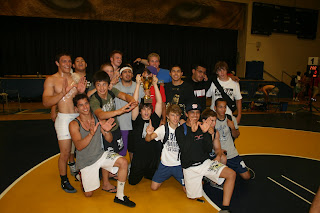 The first Americas Cup National Wrestling Dual was contested over two days in Fullerton California on Friday June 4th and then on Saturday June 5th at Clovis High in Clovis CA 12 grueling duals over two days left team Central Valley as the last teams standing. In the championship match between team JWAY (NJ) and SCWAY/Central Valley (CA) we were treated to some of the best high school wrestling California has seen in a long time. The takedowns, scrambles and just sheer mental toughness was a treat for all who attended or bought the PPV.

The championship dual started off extremely well for team JWAY as they won the first three matches. JWAY’s Anthony Asholt started the JWAY run by beating Ian Nickell 2-0 giving JWAY a 3-0 lead. He was followed by teammate Troy Heilmans Victory over Vincent Gomez making the JWAY lead 6-0. In one of the most hard fought and unexpected matches the night Kyle Cosaletto beat 2X California State Champion Alex Cisneros 6-4 in sudden victory this match was one people who saw will remember for the wild first round scrambles that left the score 0-0 going into the second round. Cisneros chose down and after a few more scrambles was able to reverse Cosaletto for a two point lead Cosaletto then reversed Cisneros and was able to ride him out for a 2-2 tie going into the third with Cosaletto having his choice. Cisneros rides Coseletto for about a minute then decides to cut him loose to trail by one with about :40 seconds left Cisneros gets in on single and was able to finish for the takedown giving him a one point lead. Not wilting to the pressure of wrestling the #3 ranked wrestler in the country Cosaletto kept wrestling and was able to escape to tie the score and force sudden victory. In the extra session Cosaletto was able to score off a Cisneros leg attempt for the victory that sent the JWAY team and fans into a frenzy as he just knocked off the #3 ranked wrestler in the country and gave his team a lead of 9-0. With team SCWAY needing points badly they sent out Indana bound Zach Zimmer to stop the JWAY run and the Senior did just that winning 6-1. SCWAY then sent out super freshman Isaah Martinez and he too was able to beat a tough JWAY opponent and bring life into the SCWAY team as now they just trailed by three 9-6. In one of the featured match-ups California State Champion and 3X place winner Nick Pena vs. NJ State Champion and undefeated Scott Festejo. This match is what wrestling is about though the score does not say it the action and intensity of this match was awesome. With the score tied 2-2 going into the third period Pena chose down and after many scrambles was finally able to get the escape and hold off the multiple attacks made by Festejo which brought the crowd to a roar as Pena had just tied the Dual 9-9. In a surprise move SCWAY chose to send out Timmy Box instead of Nathan Zarate and man did it pay off for team SCWAY right from the whistle Timmy Box’s offense was on scoring 3 takedowns and back points in the first and lead 8-2 after one. Not resting on his lead Box outscored his opponent again in the second to build his lead to 12-3 which put him in position to score a major decision but, he did not stop there he continued to push the action and was close to sealing the deal with a fall but had to settle for the tech-fall giving SCWAY its first lead of the dual. Team SCWAY continued their run with Spencer Hill posting a 5-3 win over Caamiah Bathea to push the lead to 17-9. Senior State Champion Nick Sierra showed why he was crowned the best in California with a win over Doug Cornell the NJ State Runner-Up which gave SCWAY a 20-9 lead. Like all runs it has to end some where and it did when JWAY’s Nick Visacaro 4X NHSCA AA and 2X NJ State champ beat Nikko Reyes 10-5 giving a breath of life back to JWAY and trimming the lead to 21-12. In the 171 pound match had NJ Runner –Up Caanan Bethea defeating Justin Lozano 9-3 which cut the SCWAY lead to 20-12. Then came California the other super sophmore Zach Nevills in what was going to be the swing match of this dual if he wins California could win the match with a win in either of the last two weights. As usual he delivered beating Omar Akel 5-2 building SCWAY’s lead to 23-15. Then like a good closer should Arizona State bound Tommy Burriel sealed the deal with a first period fall over AJ Mott making it 29-15. Not to be outdone HWT Louis Contraras scored his own fist period fall over Joe Nolan to end the dual at 35-15. Folks there was some amazing wrestlers and wrestling in his event. Thank you NUWAY’s Dave Dean, SCWAY’s Ernie Ciaccio and Adam Tirapelle as well as Cal State Fullerton and Clovis High for putting together and hosting some of the best wrestling this state has seen in a long time.