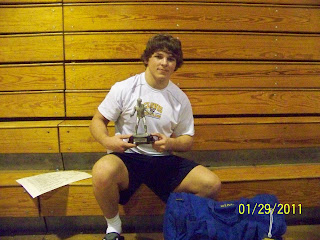 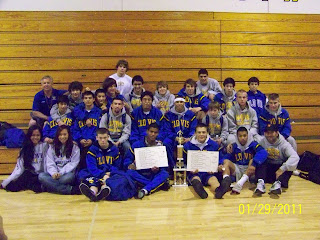 Again another tournament won!! This is going to be hard to explain.... Clovis took two teams.. Clovis A & Clovis B! However in reality, Clovis A was really a mixture of 2nd & 1st team kids and the B Team was really a mixture of 2nd & 3rd team kids!! Clovis "A" took home the CHAMPIONSHIP and Clovis "B" took 5th!! Might I add... neither had a full line up!! Way to go Cougars!! FUTURE IS BRIGHT!! Congrats to Matt Gay, Marlon Watkins, Adrian Salas & Dakota Gordon for bringing home the gold! Dakota was also named OW in upper weights!
Posted by Cindy McAlester at 12:52 PM No comments:

Wrestling begins at 9:00 am

As post season is fast approaching... thought I would get everyone thinking about accommodations. The Valley Tournament and of course State Tournament are in Bakersfield this year. I just went on priceline.com (name your price) and booked my rooms! Valley is on February 18th & February 19th and State is March 4th & 5th.

I was able to book my room for Valley for $50.00 & for State for $90.00!! Both at Four Points Sheraton! I think I may have went in a little high for State so I would suggest going in lower to see if they accept!

ALSO, IN REGARDS TO STATE TICKETS - IF YOU HAVE NOT GONE BEFORE WITH OUR TEAM... WE SIT IN THE CHEAP SEATS AND LIKE IT THAT WAY!!! HA HA!! POINT IS... GET THE LOWEST PRICE SEATS AND IT DOESN'T MATTER WHAT SECTION THEY ARE IN.

Also, for the past few years the Parent Club has provided the food for post tournaments, not including State. The usual stuff, fruit, bagels, creme cheese, PB&J, Powerade & Water. Please let me know if you would like to help. 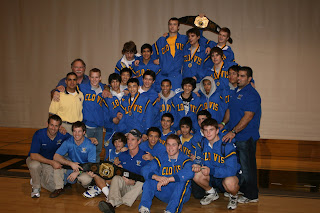 Posted by WKNevills at 10:23 AM No comments:

For those interested, the team will be staying at:

Big thanks to a great group of parents!!! You all stepped up and worked beyond your "scheduled" shifts and kept it running very smooth! Also.... those great Tri Tip Sandwiches, Hamburgers, Cheeseburgers & Hot Dogs would not have been possible without Mr. Gay & Mr. Miller!!!! They worked all day out in the cold both days!!! THANK YOU!! You know I joke a lot about the snack bar.... but the compliments we got from many people meant that we did exactly what we were suppose to do.... provide a great snack bar... for a GREAT tournament!! Job Well Done!! ... Cindy Mc﻿
Posted by Cindy McAlester at 2:35 PM No comments: 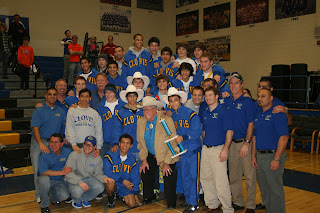 Posted by WKNevills at 5:54 PM No comments:

LIVE Results
We're going to try to add a new wrinkle for fans at this year's Doc Buchanan. Rather than wait for brackets to update every round, we'll be using the NWCA Scorebook Software to do near real-time stats for matches at the tournament. As matches are being wrestled and results come in, the scores will be recorded and available at:
http://www.nwcaonline.com/nwcaonline/CompetitionResultDocBuchanan.aspx
Posted by Adam Tirapelle at 9:19 PM No comments:

All Cheesehead Semi-Finals, 7th, 5th and 3rd place matches are all posted at BadgerStateWrestling.com

All Championship matches will be posted this Saturday night at 11:59pm central time.

Your attendance is extremely important and VERY much appreciated!! If you can not make the meeting... please contact me so we can arrange your shift for the Doc B!!

We have had very few parents sign up for a shift! Remember without the Doc B ...the number of tournaments our kids attend would be very limited.

The top teams all across the land were in action last week. No bigger event was staged than the Cheesehead in Kaukauna, Wisconsin which featured seven of our top eighteen.

#1 Apple Valley led wire-to-wire in Kaukauna. Despite crowing just one champ, the Eagles displayed incredible balance by placing eight in the finals and thirteen in the top six. They outpaced Runners-Up #3 Blair Academy by over 80 pts.

Blair distanced themselves from the rest field, with nearly a triple-digit margin over 3rd place, and then 12th-ranked Simley. The Bucs crowned a tournament-high five champions.

Simley made a strong case to move up considerably in the rankings. The Trojans placed half their line-up in the top 4.
The biggest movers, however, will be Clovis, who checked in last week at #18. The perennial powerhouse led by the esteemed Tirapelle family, rolled their way to 4th place at the Cheesehead, out-pointing 3 other nationally squads on the virtues of one champ, two finalists, and eight in the top 6.

The outstanding field at the Cheesehead was obvious. It’s not every day that you get 7 of the Top 15 teams in the same building to compete.

What’s less apparent to the average fan is just how great of an event and an environment this tournament is. It’s a well-oiled machine that goes off without a hitch thanks to its plethora of dedicated and accommodating staff and volunteers.

And from a fans perspective, the action couldn’t get much better.

Because of its unique pool bracketing, you get de facto quarter and semi-finals on Day I before heading into the Day II mini-tournament. We were privileged enough to see a Brooks Black-Nick Nevills barnburner twice. And a guy like Dom Malone (WySem) who was caught and pinned in a pool match, can claim redemption like he did by winning the title in a rematch in the finals with George Fisher (Marmion), the guy who pinned him.

What it means to you and I is: we don’t have to wait around through the fluff to get to the meat of the match-ups.

Outside of Wisconsin, 10 of the other 13 ranked squads competed.

Here’s how they did:

•#2 St. Paris-Graham more than doubled up the field at the Miami Valley Tournament with 330 team points to Runners-Up Centerville’s 140.
•#4 Brandon won the Heart of Dixie Classic at Vestavia Hills (Alabama’s most distinguished team) by a whopping 270pts.
•#5 Bakersfield, despite missing the services of two starters, won a tough intra-state dual with Oakdale, who is ranked as the 3rd best team in the Golden State.
•#8 St. Ed’s won the Medina Tournament (OH) convincingly over #16 Massillon-Perry, 288 to 208. Ed’s had six champs on seven finalists. Perry had seven in the top 4.
•#13 Easton rolled to the Manheim title over Robinson (VA) and Reynolds. The Red Rovers crowned five champs.
•#14 Bethlehem Catholic had eight champs and a runner-up as they hosted their annual Christmas City Tournament.
•#18 High Point led the Mustang Classic field with five champs and a runner-up.
•#19 St. John’s bested some of Michigan’s Best including Detroit Central Catholic in winning the Goodrich Invitational. St. John’s 224pts topped DCC’s 201, and Dundee’s 186.5. St. John’s was 6-for-6 in the finals.
•#20 Roseburg blitzed the Douglas County Invite. They had 8 champions on 10 finalists and posted a team score of 220.5 that nearly doubled up 2nd place Reedsport’s 113.
This upcoming week’s big event is The Clash in Rochester, Minnesota. The 9th edition of this event will feature 10 TOM-recognized teams; 6 ranked, and 4 honorable mention. For brackets visit: http://theclash.theopenmat.org
And watch for our preview coming shortly. We will also offer live event coverage.

Other big events this week include the Doc Buchanan in California where most of the state’s big dogs will tangle including #5Bakersfield and #10 Clovis.

St. Ed’s and Perry will see each other for the second consecutive week. They’ll both be at Wadsworth, this time, for a dual showdown.

Like always, our Individual National Rankings will be released Wednesday.

Notes:
The Top 5 stay intact with results to confirm their positions. St. Ed’s, now with their full contingent on the mats, moves into the 6th slot.

Simley gets a big boost, from 12th to 7th, behind St. Ed’s and in front of the Iowa schools, who we’ll learn more about this weekend.

Clovis is the biggest mover; from 17th to 10th after a fantastic showing at the Cheesehead. There are two events which we’ll be able to use to further gauge them this week; they’ll face #5Bakersfield as well as many of CA’s best at the Doc Buchanan. Also, the results of Simley and Rapids duals vs. the Iowa schools should serve as a barometer.
Rapids stays put at #11. There were two teams ranked ahead of them that they finished better than, and two teams ranked behind them that out-placed them.

Another team on the rise is St. Johns, Michigan. They move up five spots, and ahead of Easton at #14.

#19 High Point is an interesting team. They could be much better than their ranking, but their loss to Perry at King of the Mountain keeps them there for now. They will have an opportunity to move up in a few weeks with a good showing at The Final Four.

Your attendance is extremely important and VERY much appreciated!! If you can not make the meeting... please contact me so we can arrange your shift for the Doc B!!

We have had very few parents sign up for a shift! Remember without the Doc B ...the number of tournaments our kids attend would be very limited. 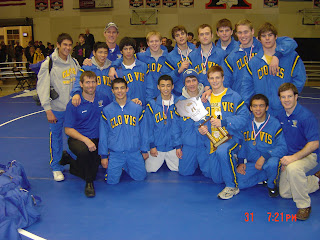 Posted by WKNevills at 2:10 PM No comments: